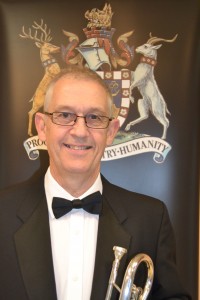 Les is one half of a duo that played with the Hammonds Sauceworks Band back in the day. He was bribed into moving down from Scotland, took the top seat at Hammonds and became one of the safest pairs of hands in Yorkshire banding. When not playing, or advising the band on Geranium cultivation, he loves cruising (not that kind) and likes to think he’s handy on the table tennis table.

Colleen makes up the second member of our esteemed duo, she has a long and impressive lineage with the Hammonds bands and alongside her husband supplies massive experience and strength to the front row. She also loves travel and shows her mental age by claiming Disney World as her favourite holiday destination.

Favourite Pop Song: Brian Adams – Everything I do ….  Fond memories of nursing my newborn son back in 91.